Is it nothing to you? Lamentations, Law and Gospel (1) 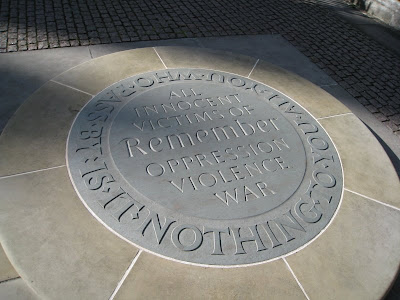 The most read Bible verse in the town where I live comes, surprisingly, from the book of Lamentations.

People read this verse every single day. Once a year it is read by a large group of people. The exact verse is Lamentations 1:12:

Is it nothing to you, all you who pass by?

This verse is a common inscription on cenotaphs. It does seem to be a fitting way to grab onlookers by the conscience, especially succeeding generations for whom the conflicts of WWI and WWII are ignored or forgotten.

The verse, however, is half quoted and taken out of context. It should read:

Is it nothing to you, all you who pass by? Look and see if there is any sorrow like my sorrow, which was brought upon me, which the LORD inflicted on the day of his fierce anger.

The voice personifies the lament of Jerusalem, Zion, the city of the Great King. The destruction of Jerusalem at the hands of Nebuchadnezzar's army was unlike any other siege. As Old Testament scholar Barry Webb says concerning Lamentations:

It is a book about suffering, but not suffering in general. It is about deserved suffering, suffering for sin...The book of Lamentations, more than any other OT book, shows us God's wrath as a directly experienced reality.

Ask most Christians to list their favourite Bible books in order and Lamentations would appear at about the same place that the Welsh national football (soccer) team does in the FIFA world rankings...somewhere near the bottom. However, it is an important book to help us understand wrath and sin, righteousness and judgment, Law and Gospel.

The temple, the city, and the land had all been given as a gift to the people of God (all of these were types of the heavenly realities). They had been redeemed from Egypt and brought into the land. It was because God loved them that he chose them. He brought them out of Egypt to keep the oath that he swore to the patriarchs (Deut. 7:7-11; Exodus 6:2-8). As a nation at Sinai the people had bound themselves to obey the Law (Exodus 24:7-8). In that extraordinary chapter, Deuteronomy 28, spelling out the blessings for obedience and curses for disobedience God said:

If you are not careful to do all the words of this law that are written in this book, that you may fear this glorious and awesome name, the LORD your God, then the LORD will bring on you and your offspring extraordinary afflictions (58-59).

As long as the possession of the land, the city and the temple, depended on the obedience of the nation the threat of judgment hung over them. This was not an inheritance that could never perish, spoil or fade. In the anguish of the book this is acknowledged (1:5, 18; 2:17). They did get what they deserved, and what God had said would happen, however unbearable this was.

This is why the book ends on a precarious and bleak note (5:20-22). There is no final resolution at the end. How can there be as long as it depends on the obedience of the people?

But there will be another Israel, a covenant keeper, an obedient Son. He will fulfill all righteousness, his obedience will guarantee and secure the inheritance. And he will endure the wrath of God as if he himself were a covenant breaker. All the curses will fall on him. The resolution to Lamentations will be found at the cross (Galatians 3:10-14).

This truth is expressed in questions 37 and 39 of the Heidelberg Catechism:

37. What do you understand by the word “suffered?”

That all the time He lived on earth, but especially at the end of His life, He bore, in body and soul, the wrath of God against the sin of the whole human race; in order that by His suffering, as the only atoning sacrifice, He might redeem our body and soul from everlasting damnation, and obtain for us the grace of God, righteousness, and eternal life.

39. Is there anything more in His having been “crucified” than if He had suffered some other death?

Yes, for thereby I am assured that He took upon Himself the curse which lay upon me, because the death of the cross was accursed of God.

Posted by Martin Downes at 7:14 PM

I wanted you to know that I love reading your blog and have added it to my favorites. The way you approach scripture and God is so awesome. You are so fresh when it comes to making God and the Bible applicable. I love that about your blog.
Keep up the great work!

Oh, love for you to check out mine any time.

Thank you for your very kind words.