A sort of idolatry 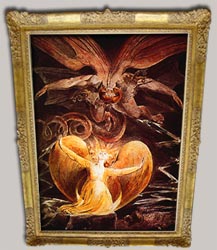 One of the main deficiencies in writings about hermeneutics is the failure to include a chapter on Satanic interpretations.  The devil is after all an interpreter of reality, his words are offered as an alternative explanation of the things that are made (including human nature), and a better explanation of how things work.

Genesis 1-3 is all about interpretation.  God interprets reality (1:10, "God called the dry land earth...And God saw that it was good").  The man and the woman are to acquiesce in the interpretation of God concerning the tree of the knowledge of good and evil (2:15-17).  The serpent offers a rival interpretation of what God has already interpreted (3:1, 4-5), and so on.

There are plenty of other examples in Scripture of both the link between Satan (and his demons) and heresies, and also the manifestation of Satan's activity in the preaching of false Christ's and false gospels (2 Cor. 11; Gal. 3:1, 1 John), or in other words, false interpretations offered by malevolent interpreters (they shudder at God's existence but oppose his rule and have no love for him).  We also need to bear in mind that when Christ is tempted in the wilderness the successive attacks of Satan focus on questions of interpretation ("If you are the Son of God...")

Why has this dimension of hermeneutics failed to get any coverage in evangelical writings about interpreting Scripture?  And it really is a failure, this aspect is almost entirely ignored.  Does this neglect shed any light on the loss of nerve concerning our confidence in there being a God-given right interpretation accessible to us?  Is the Serpent not still whispering "But did God really say"?  If we neglect his presence in our thinking on this subject would he have it any other way?

If we confine our thinking about interpretations and interpreters to those offered by mere flesh and blood we are being desperately naive about the whole subject.  We need to go back to the beginning and read Genesis with a bit more care.

Here is what Tertullian had to say on the matter:


The same being, possessing still the same genius, both set his heart upon, and succeeded in, adapting to his profane and rival creed the very documents of divine things and of the Christian saints--his interpretation from their interpretations, his words from their words, his parables from their parables.

For this reason, then, no one ought to doubt, either that "spiritual wickednesses," from which also heresies come, have been introduced by the devil, or that there is any real difference between heresies and idolatry, seeing as they appertain both to the same author and the same work that idolatry does.

The consequence is, that every lie which they speak of God is in a certain sense a sort of idolatry.

I agree regarding the notion that heresy and idolatry are fruits from the same tree. In essence, both are rooted in contempt for their Creator, and both come up with the wrong answer to the question: What is God like?

You're on to something here, something big - at least a book's worth.

About the missing interpreter when evangelicals write about hermeneutics?