Is your universalism big enough to include the devil and his angels? 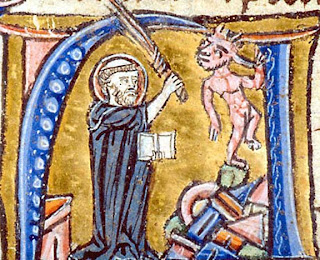 If you lean toward universalism, because you are so compassionate, just how tender-hearted are you?  Will you extend salvation beyond the worst infidels in the human race?  Is Satan himself doomed to be saved?

That is the question that Augustine asked of Origen and those like him:


I must now, I see, enter the lists of amicable controversy with those tender-hearted Christians who decline to believe that any, or that all of those whom the infallibly just Judge may pronounce worthy of the punishment of hell, shall suffer eternally, and who suppose that they shall be delivered after a fixed term of punishment, longer or shorter according to the amount of each man’s sin.

In respect of this matter, Origen was even more indulgent; for he believed that even the devil himself and his angels, after suffering those more severe and prolonged pains which their sins deserved, should be delivered from their torments, and associated with the holy angels.

But the Church, not without reason, condemned him for this and other errors, especially for his theory of the ceaseless alternation of happiness and misery, and the interminable transitions from the one state to the other at fixed periods of ages; for in this theory he lost even the credit of being merciful, by allotting to the saints real miseries for the expiation of their sins, and false happiness, which brought them no
true and secure joy, that is, no fearless assurance of eternal blessedness.

Very different, however, is the error we speak of, which is dictated by the tenderness of these Christians who suppose that the sufferings of those who are condemned in the judgment will be temporary, while the blessedness of all who are sooner or later set free will be eternal. Which opinion, if it is good and true because it is merciful, will be so much the better and truer in proportion as it becomes more merciful.

Let,then, this fountain of mercy be extended, and flow forth even to the lost angels, and let them also be set free, at least after as many and long ages as seem fit! Why does this stream of mercy flow to all the human race, and dry up as soon as it reaches the angelic? And yet they dare not extend their pity further, and propose the deliverance of the devil himself. Or if any one is bold enough to do so, he does indeed put to shame their charity, but is himself convicted of error that is more unsightly, and a wresting of God’s truth that is more perverse, in proportion as his clemency of sentiment seems to be greater.

I enjoyed this, I've had similar thoughts toward election, people often times are not bothered that satan and his angels are not elect and do not have an atonement for them. Which implies of course that maybe we are humanistic in our justice.