Dear Church, imagine there's no Hell, it's easy if you try... 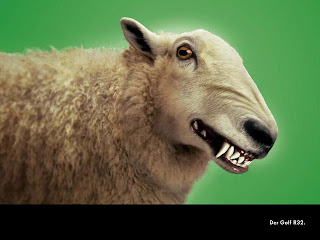 What the Church believes, teaches and confesses on the basis of the Word of God is constantly under pressure from forces that would alter the substance of that confession.

The external pressure comes from a world that finds Christian truth claims morally and intellectually unpalatable and coercive.

The internal pressure comes from heretics speaking twisted things.  These disfigured beliefs, misshapen orthodoxies, sometimes stem from an attempt to Christianize ideas borrowed from elsewhere.  So often this baptizing of human wisdom is then coupled with a faulty exegesis of particular texts and an inadequate synthesis of the entire teaching of Scripture on that particular point.

Faulty but plausible exposition and theologizing helps error gain traction, but we will never come to grips with it unless we ask serious questions about the rectitude of the heart.

And so it is when we come to the doctrine of Hell.

The following is taken from the foreword by David F. Wells to Robert Peterson's excellent work Hell on Trial: The Case for Eternal Punishment:


It is always important for us to discern why, at a particular time, certain issues come to the fore and engage the church's attention.  Usually the reason for this resolves itself into a choice between two options.

And there is little doubt in my mind that in the case before us, the uniqueness of Christian faith and the reality of God's abiding judgement upon unbelief, it is our modernized and secularized culture that is principally unsettling the church.

It is, admittedly, difficult to show beyond a shadow of a doubt that the blurring of the edges of faith that is happening within the church today is being fed by these cultural attitudes.  But the awkward fact is that the church, for nineteen hundred years, has believed in the uniqueness of Christ, the truth of the Word, and the necessity of God's judgement on the impenitent; and we have to ask why, in the late twentieth century, some or all of these beliefs now seem to have become so unbelievable.

He also loves to imagine that there is no hell.

Here is a link to the article -
http://www.freep.com/article/20110330/NEWS05/103300405/Grand-Rapids-pastor-Rob-Bell-has-Christians-debating-new-book?odyssey=tab|topnews|text|FRONTPAGE

Dear friends, do not believe every spirit, but test the spirits to see whether they are from God, because many false prophets have gone out into the world. The Spirit clearly says that in later times some will abandon the faith and follow deceiving spirits and things taught by demons. Why would demons teach there is no hell - so you can join them there. But Jesus does not want you there, so much so that He died on the CROSS to give you a way to avoid hell and gain heaven.

Don't let one of the false prophets rob you of heaven, accept what he has done for you and Stay Out Of Hell!

The Bible clearly proves that time ends at the Lord’s return. Revelation 10:5-7. Moreover, these are not merely “words”. It’s clearly proven in comprehending in sound biblical doctrine what “eternity” is – and is not. What time is – and is not. For example, we see that there was an “in the beginning” and a “first day”. This is when “time began”. Jesus is the First and the Last. On the First Day, Jesus was the Light that shone into the darkness when God said, “Let there be light…” The evening and the morning were the First Day. The First Day occurred, with separation and one cycle of revolution of darkness and Light — before there was any sun or moon. Both the darkness and Light were fully spiritual. Thus, “time began” as a “fall from eternity” in the emergence of darkness – and the relationship between Light and darkness. These truths are self-evident. When Jesus returns, there will be no more time. The Light that was spoken forth into the void — will shine everywhere. Jesus will destroy Satan, who He destroyed on the cross, by the brightness of His coming. There will be no more night. The darkness will be past. Time will end.

Now, when the Biblical understanding of time is the emergence of darkness and the relationship between darkness and Light — We can clearly see that Eternity is the Light. The most cursory knowledge of theology tells us that only God Himself has always existed and that all other beings are created. Thus, God is Eternal. No one and nothing else can claim “eternal existence” apart from Him and by His Spirit. Furthermore, the scripture boldly declares: 1 Timothy 1:6 Who only hath immortality, dwelling in the light which no man can approach unto; whom no man hath seen, nor can see: to whom be honour and power everlasting. Amen.

It is not possible to have immortality or to be an eternal being apart from God alone who hath immortality and who alone is immortal.

All that is temporal and of time has an appointed end — and will end. Thus, salvation in Jesus Christ — because it is in Christ who is God and alone hath immortality — is of course immortal in Christ Jesus our Lord.

However, mortality which is temporal — all things of the darkness have an appointed end that is wrought by the manifestation of the appearing of our Savior.

2 Timothy 1:10
But is now made manifest by the appearing of our Saviour Jesus Christ, who hath abolished death, and hath brought life and immortality to light through the gospel:

There is and there can be no immortality apart from Jesus Christ who is the Light. Further, I have evidenced biblically that the Light is eternal whereas darkness is temporal.

So, when interpreting scripture, we should rely on sound theology of time and eternity and the immortality that is in Christ Jesus alone.

Of course the words for punishment cannot mean “time without end”. Rather, they mean “until time ends” at the return of Jesus Christ.