Christmas had made the bitterest foes friends 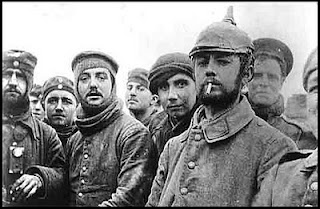 The following is an extract from a poignant letter written by Private Frederick W. Heath about the Christmas Armistice in 1914:


Jumping up onto the parapet, a few of us advanced to meet the on-coming Germans. Out went the hands and tightened in the grip of friendship. Christmas had made the bitterest foes friends.

Here was no desire to kill, but just the wish of a few simple soldiers (and no one is quite so simple as a soldier) that on Christmas Day, at any rate, the force of fire should cease. We gave each other cigarettes and exchanged all manner of things. We wrote our names and addresses on the field service postcards, and exchanged them for German ones. We cut the buttons off our coats and took in exchange the Imperial Arms of Germany.

But the gift of gifts was Christmas pudding. The sight of it made the Germans' eyes grow wide with hungry wonder, and at the first bite of it they were our friends for ever. Given a sufficient quantity of Christmas puddings, every German in the trenches before ours would have surrendered.
And so we stayed together for a while and talked, even though all the time there was a strained feeling of suspicion which rather spoilt this Christmas armistice. We could not help remembering that we were enemies, even though we had shaken hands. We dare not advance too near their trenches lest we saw too much, nor could the Germans come beyond the barbed wire which lay before ours. After we had chatted, we turned back to our respective trenches for breakfast.
All through the day no shot was fired, and all we did was talk to each other and make confessions which, perhaps, were truer at that curious moment than in the normal times of war.

You can read the whole thing in The Independent
Posted by Martin Downes at 5:54 PM

Nice bllog thanks for posting