The Erosion of Inerrancy in Evangelicalism by Greg Beale 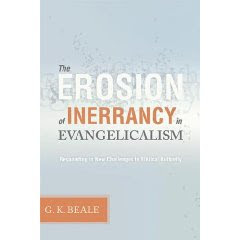 This new book by Greg Beale caught my eye. Published by Crossway, it will be available in late November and weighs in at 256 pages. Here's the blurb from Amazon:

Due to recent popular challenges to evangelical doctrine, biblical inerrancy is a topic receiving an increasing amount of attention among theologians and other scholars. Here G. K. Beale vigorously and even-handedly examines the writings of one leading postmodernist, Peter Enns, whose writings challenge biblical authority. In resounding support of inerrancy, Beale presents his own set of formidable challenges to the postmodern suppositions of Enns and others, citing contradictions, dichotomies, oversights, and faulty reasoning.

This book repeatedly demonstrates the implausibility of compromise or striking a balance in the matter of inerrancy—not merely as a debate between academics, but as an issue that affects the entire body of Christ. How can the Bible be historically inaccurate while still serving as the authoritative word on morality and salvation? Beale concludes that it cannot, and his work will aid all who support biblical inerrancy in defending their position against postmodern attacks.
Posted by Martin Downes at 9:25 AM

Thanks for drawing attention to this book. I think we are well overdue for such a work.
It is good to see it coming from a scholar like Beale. In light of the comments about Enns one wonders if Beale's being a NT scholar will prejudice some against the work. It seems that a lot of ink has been spilt over the fact that a lot of criticism of Enns' work has come from NT scholars and systematic theologians. Personally, I think this is disppointing because an argument has got to be traken seriously regardless of one's specialty.
Anyway, thanks for alerting me to this helpful looking work

I'm a little perplexed, as you rightly note, by that line about NT/Systematics scholars not being the right people to critique this work. On the one hand we are told that this is a popular level work, and on the other that only OT specialists can adequately critique it.

Do you think its fair to call Enns a postmodernist? Is that a description of himself that he'd recognise?

The blurb I got from Crossway uses that language, but how that relates to Beale's own analysis of Enns I'm not able to say.

"How can the Bible be historically inaccurate while still serving as the authoritative word on morality and salvation?"

By posing the question this way I think the point is missed. When we appraoch historical narrative in the OT the question is not "Is this factually correct?" but rather "What is the message that the author of the narrative is trying to convey". Take the accounts of David in Kings and Chronicles. The order of events is different but the reason could stem from two reasons; (1) the Deuteronomist is seeking to convey a different message than the Chronicler, or (2) the Deuteronomist is using a different source than the Chronicler.

The explanation of (1) seems the best. So which is the true account? To pose such a question misses the point. So I simply point out again that when we appraoch historical narrative in the OT the question is not "Is this factually correct?" but rather "What is the message that the author of the narrative is trying to convey".

I therefore sind the whole inerrancy issue largely mistaken from both the Critical and Evangelical side.

You may have already done this (I sure you have), but would you define HERESY for me.