The Abuse of the Bible and the Use of Extrabiblical Language 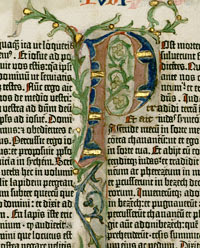 Light is cast on the use of extrabiblical language in the creeds when we consider the behaviour of heretics.

Letham makes this helpful observation in his discussion of potential problems with Trinitarianism:

Part of the problem for the ordinary Christian may be that in its debates and struggles, the ancient church was forced to use extrabiblical terms to defend biblical concepts. This was necessary because heretics misused the Bible to support their erroneous ideas.

Athanasius provides a glimpse of what happened at the Council of Nicea (A.D. 325), when the assembled bishops rejected the claim of Arius that the Son was not eternal, but was created by God, who thereby became his Father. Originally, the statement was proposed to the Council that the Son came "from God." This meant that he was not from some other source, nor was he a creature. However, those who sympathized. with Arius agreed to the phrase, since in their eyes all creatures came forth from God. Consequently, the Council was forced to look for a word that excluded all possibility of an Arian interpretation. Biblical language could not resolve the issue, for the conflict was over the meaning of biblical language in the first place.

This point was made quite powerfully by Vincent of Lerins:

Heretics appeal to Scripture that they may more easily succeed in deceiving.

Here, possibly, some one may ask, Do heretics also appeal to Scripture ? They do indeed, and with a vengeance; for you may see them scamper through every single book of Holy Scripture,--through the books of Moses, the books of Kings, the Psalms, the Epistles, the Gospels, the Prophets. Whether among their own people, or among strangers, in private or in public, in speaking or in writing, at convivial meetings, or in the streets, hardly ever do they bring forward anything of their own which they do not endeavour to shelter under words of Scripture. Read the works of Paul of Samosata, of Priscillian, of Eunomius, of Jovinian, and the rest of those pests, and you will see an infinite heap of instances, hardly a single page, which does not bristle with plausible quotations from the New Tesment or the Old.

But the more secretly they conceal themselves under shelter of the Divine Law, so much the more are they to be feared and guarded against. For they know that the evil stench of their doctrine will hardly find acceptance with any one if it be exhaled pure and simple. They sprinkle it over, therefore, with the perfume of heavenly language, in order that one who would be ready to despise human error, may hesitate to condemn divine words. They do, in fact, what nurses do when they would prepare some bitter draught for children; they smear the edge of the cup all round with honey, that the unsuspecting child, having first tasted the sweet, may have no fear of the bitter. So too do these act, who disguise poisonous herbs and noxious juices under the names of medicines, so that no one almost, when he reads the label, suspects the poison.

It was for this reason that the Saviour cried, "Beware of false prophets who come to you in sheep's clothing, but inwardly they are ravening wolves." What is meant by "sheep's closing"? What but the words which prophets and apostles with the guilelessness of sheep wove beforehand as fleeces, for that immaculate Lamb which taketh away the sin of the world ? What are the ravening wolves? What but the savage and rabid glosses of heretics, who continually infest the Church's folds, and tear in pieces the flock of Christ wherever they are able ? But that they may with more successful guile steal upon the unsuspecting sheep, retaining the ferocity of the wolf, they put off his appearance, and wrap themselves, so to say, in the language of the Divine Law, as in a fleece, so that one, having felt the softness of wool, may have no dread of the wolf's fangs.

Email ThisBlogThis!Share to TwitterShare to FacebookShare to Pinterest
Labels: Anecdotes from Church History, The Defense Against the Dark Arts