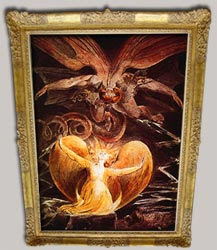 “There is more need to fear and beware of the Enemy when he creeps up secretly, when he beguiles us by a show of peace and steals forward by those hidden approaches which have earned him the name of the 'Serpent'...He invented heresies and schisms so as to undermine the faith, to corrupt the truth, to sunder our unity. Those whom he failed to keep in the blindness of their old ways he beguiles, and leads them up a new road of illusion.”

Or as one writer put it “renouncing the devil means denouncing heresy.”

Secondly, it is vitally important to understand that heresy is the takeover of Christianity by an alien worldview. Paul warned the Colossians about “plausible arguments” and those who were trying to take them captive by “philosophy and empty deceit according to human tradition,” (Col. 2:4, 8). Heretics often use the words of the Bible, change their meaning, and hide false ideas under them. The label may still say “Christ,” “salvation,” or “atonement” but the meaning of these words have been radically altered. The early church fathers were alert to this danger. They wrote books to expose the fact that heretics were really saying the same thing as pagan philosophers, only the heretics were dressing up these ideas in Christian language. This deceitfulness makes heresy morally as well as doctrinally wrong.

Posted by Martin Downes at 1:31 PM