New Book: The Courage to be Protestant 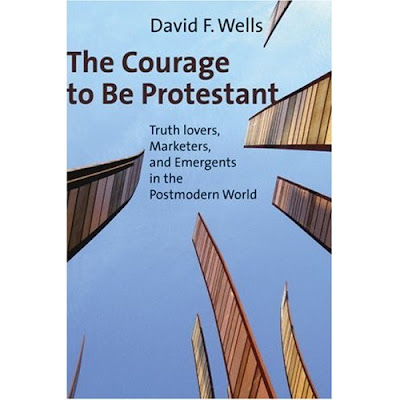 One rainy afternoon in the summer of 1997 I picked up a book by David Wells. It was his No Place For Truth: Or Whatever Happened to Evangelical Theology? I was hooked and eagerly read through the next three volumes in the series.

Here's the blurb for his latest book from the Westminster Bookstore:

"It takes no courage to sign up as a Protestant." These words open this bold new text - the summa of David Wells's critique of the evangelical landscape—leaving no doubt that Wells is issuing a challenge to the modern church.

This book is a broadside against "new" versions of evangelicalism as well as a call to return to the historic faith, one defined by Reformation solas (grace, faith, and scripture alone), and to a reverence for doctrine.

Wells argues that the historic, classical evangelicalism is one marked by doctrinal seriousness, as opposed to the new movements of the marketing church and the emergent church. He energetically confronts the marketing communities and what he terms their "sermons-from-a-barstool and parking lots and apres-worship Starbucks stands."

He also takes issue with the most popular evangelical movement in recent years - the emergent church. Emergents are postmodern and postconservative and postfoundational, embracing a less absolute, understanding of the authority of Scripture than Wells maintains is required.

The Courage to be Protestant is a dynamic argument for the courage to be faithful to what biblical Christianity has always stood for, thereby securing hope for the church's future.

Tim Challies has some extracts and comments here. Including the following:

Emergents—at least those who read theology—seem to have stumbled on the postliberals, and this is what is now driving this new understanding of the function of Scripture. They have taken up this fad as if it were the most current, cutting-edge expression in contemporary thought, though in the academic world it has already disappeared.

Plain language and clear communication are not in vogue in postmodern circles. They reveal the speaker as being too much of a realist, too obviously rational, too modern, too unchic. No, we can’t have that! The required alternative speech is subtle parody, contradiction, being indeterminate, being ironic, being playful. This, however, is not as easy to do as it seems and many postmoderns, lacking the skills, settle simply for being obscure.

There are tricks to this. A plain speaker might write of someone else’s “view.” A “view”? How flat-footed and prosaic! How about that person’s “voice” or, better yet, their different “vocality”? And prefixes are a treasure trove for those in search of depths beyond the grasp of the reader, prefixes such as pre-, hyper-, post-, de-, ex-, and counter- - as in words like de-confusing and re-constructing. These all open up new possibilities as do a new constellation of suffixes to go with them. We today, you see, are living in a moment when the multivocalities of post-colonial others are entering our intra/post/spacialities and are exposing the anti-sociality concealed in the hegemony of our discourse and sensibilities.

Listen to the emergent church and this kind of empty obfuscation is what we hear all too often, though usually without this kind of veneer of intellectual sophistication. In its place (and usually on the internet), we hear the confidence of those who have a sense of being on the edge of What-is-Happening-Now but who, for that very reason, are diffident, unsure, tentative and, more often than not, simply confused.

I am doing a chapter-by-chapter recap on my blog.