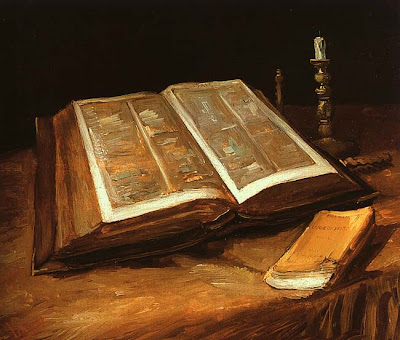 When God speaks to us, we dare not criticize what he says. Our only recourse is to believe and to obey. Now, what of inerrancy? Well, the inerrancy of Scripture is certainly implied in what I have said already, if we are permitted to take "inerrancy" in its normal, dictionary meaning. "Inerrant" simply means "without error," or "true" in the sense that we normally speak of true sentences, true doctrines, true accounts, true principles. Were God to speak to us in person, "directly," none of us would dare to charge him with error. Errors arise from ignorance or deceit; and our God is neither ignorant, nor is he a deceiver. Similarly, we dare not charge his written Word with error.

This is not a mere "modern" position...it is the position of Scripture itself. Augustine in the fifth century declared, "None of these (scriptural) authors has erred in any respect of writing." Shall we speak today of biblical "inerrancy?" The term does, to be sure, produce confusion in some circles. Some theologians have gone far astray from the dictionary meaning of "inerrant." James Orr, for example, defined "inerrant" as "hard and fast literality in minute matters of historical, geographical, and scientific detail." Well, if "inerrancy" requires literalism, then we should renounce inerrancy; for the Bible is not always to be interpreted literally. Certainly there are important questions of Bible interpretation that one bypasses if he accepts biblical inerrancy in this sense.

But we should remember that Orr's use of the term, and the similar uses of contemporary theologians, are distortions of its meaning. Perhaps those distortions have become so frequent today as to inhibit the usefulness of the term. For the time being, however, I would like to keep the term, and explain to people who question me that I am not using it in Orr's sense, but rather to confess the historic faith of the church.

From an article published in 2002. Read the whole thing here.
Posted by Martin Downes at 1:02 PM

That's a great find. I keep bumping into people who say they wish they could speak positively of the truthfulness of Scripture, rather than negatively of its inerrancy. Maybe that's the real rethink we should be having at the moment about the vocab we use of Scripture - it is truth. Can't we call an ecumenical council and get this changed? Oh, now I remember - the Westminster Confession actually speaks about 'infallible [=unerring] truth'. Clever guys, those Westminster divines.

Prof. Frame quotes James Orr as defining "inerrancy as "hard and fast literality in minute matters of historical, geographical, and scientific detail." What I personally do not understand, really, is the objection to Orr's definition by Prof. Frame. I suppose this is because Prof. Frame did not specifically mention the autographa or apographa as the context.

Apographic inerrancy is limited to the ORIGINAL languages of Hebrew and Greek. Thus, it does NOT apply to the KJV. It only applies to the underlying texts, i.e. "Textus Receptus", an off-shoot of the "Majority" or "Byzantine-type Text". Hence, the inerrancy is defined in terms of linguistic continuity, of the extant (i.e. existing) manuscripts.

The divine properties of "inerrancy", "self-sufficiency", etc, are "extended" in the time and space "continuum" include the apographa. Under this model, the apographa is *self-correcting*. For example, scribal errors in one manuscript can be easily corrected by other manuscripts. So, the process of "textual criticism" is limited to PRESERVATION of the Word of God in the apographa, rather than RECONSTRUCTION of the autographa. Textual criticism serves ecclesiastical traditionalism, not vice versa.

Hence, the "inerrancy" of the *apographic* texts is "implicit", i.e. implied in the PROCESS of providential preservation itself.

Thus, whilst ultimately *absolute* inerrancy is to be attributed only to the autographa, *relative* inerrancy applies to the apographa. So, yes I would assent to Prof. Frame's view if that is the meaning. However, if Prof. Frame is referring relative inerrancy to the *autographa*, I would disagree. I agree that "inerrancy" abd "infallibility" need not be conflated. They are distinguishable and that it is better to use the term, "infallibility" in keeping with tradition. But BOTH inerrancy and infallibility possess the same equal ultimacy and absoluteness as grounded in DIVINE inspiration.