The Corruption of the best is the worst 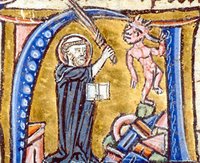 Here is Augustine refuting heretics. The depiction of the heretic fits with Paul's reference to the origin of false teaching in 1 Timothy 4:1.

Pelagianism is a further example of the dressing up of an alien worldview in the theological clothes of Christianity. It is another instance of the Invasion of the Body Snatchers, the takeover of Christianity from within by an externally originating philosophy.


Pelagius taught not only that men had free will, but he also denied the ruin of the human race and the necessity of grace. Jerome said at the time that Pelagianism was the heresy of "Pythagoras and Zeno". Dean Milman, almost 1 500 years later noted that "the greater part" of Pelagius' letter to Demetrius "might have been written by an ancient academic". Another writer said that Pelagianism seemed to him to be "a rehabilitation of the general heathen view of the world."

Augustine took up his pen against the Pelagian doctrine of salvation. He wanted to contend against the erroneous teaching but to keep silence on the teachers so that "the men might rather be brought to see and acknowledge their error through fear of ecclesiastical judgement than be punished by the actual judgement."

As it was, at the end of April 418 AD, Pelagius and Coelestius were banished from Rome.

Concerning the diverse response of the Church to paganism "pure and simple", as over against paganism "passing itself off as Christianity" Harold Brown wrote:

"Corruptio optimi pessimum est, says the proverb: 'the corruption of the best is the worst'. The early Christians felt a measure of tolerance for the pagans, even though they were persecuted by them, for the pagans were ignorant. 'This ignorance', Paul told the Athenians, 'God winked at' (Acts 17:30). But Paul did not wink at him who brought 'any other Gospel' within the context of the Christian community. 'Let him be accursed' he told the Galatian church (Gal. 1:8). Honorable enemies are regarded with less hostility than the traitor from within one's own camp. The Christian life is often presented as spiritual warfare; if the pagans are the enemies, the heretics are the traitors."

The goal of the world, the flesh, and the devil is the invasion of the body snatchers. :)