Ancient & Modern Heresies: What caused Socinianism? What can cure it? Part 1 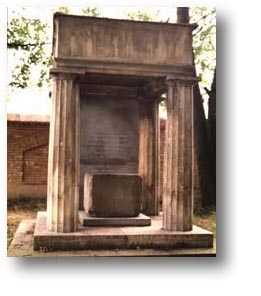 This is a picture of the mausoleum of Faustus Socinus. Socinianism is such an old word that you almost feel the need to blow the dust off it. In the 19th century Thomas Carlyle referred to the "dusthole of extinct Socinianism". But like any other form of false teaching it can never be extinct, only dormant. Like Dracula, even after a stake in the heart, it never seems to die.

I am persuaded that this is because it is the position one turns to after rejecting some of the things of first importance while still wanting to remain evangelical or Christian.

What is notable, and disturbing, is that Fautus Socinus is inadvertently the most influential figure in broad evangelical circles in the Western world today. This is not because the Racovian Catechism is being read, or the Bibliotheca Fratrum Polonorum tops the book charts. But Socinus' doctrinal conclusions are being drawn today. Well more than drawn, his old ideas are getting a fresh coat of paint and even being passed of as new, exciting and more faithful to the text of Scripture than what we have come to accept as the classical evangelical heritage.

Open theists and "evangelical" opponents of penal substitution are drawing the same doctrinal conclusions as Socinus did. Sometimes they are even using the same arguments.

Another remarkable thing about 17th century Socinianism is that it revised Reformed and Catholic theology right across the board. It was, in the end, a total re-write. The trinity, justification by faith, penal substitution, exhaustive divine foreknowledge, creatio ex nihilo, eternal punishment, and salvation by grace alone were all jettisoned.

Why was this revision so thorough? Why did it affect so many doctrines?

1. Socinianism was definitely forged out of a reactionary mood

As the historian Thomas Lindsay notes, it "had its distinct and definite beginning in a criticism of doctrines, and this must never be forgotten if its true character is to be understood". Laelio Sozzini, the uncle of Fautus, was known to discuss and cast doubt on such doctrines as the satisfaction of Christ and the Trinity. Calvin wrote to him to correct this restless questioning and urged him to be content with the truth.

Eventually the anti-trinitarians found a "safe place" to do theology in Poland. There they were able to establish a church, school and printing press. John Owen, in the historical prologue to Vindicae Evangelicae (his State commissioned refutation of Socinianism), also noted the reactionary element in Socinianism. But Owen wondered whether this reaction was, in part, to erroneous Roman Catholic representations of the Trinity. Reacting to a distortion of the truth they headed off in the direction of an opposite error. There may well be some merit in Owen's suggestion, but even after rejecting a straw man people do go on to reject the true explanation of the same doctrines.

Doubtless there are some affinities between Thomas Lindsay's comment and contemporary movements like, among others, the Emergent church.


2. The dominant explanation is that Socinianism was thoroughly rationalistic

Harnack referred to it as "supernatural rationalism". Francis Turretin considered the use of reason in Socianism as "despotic". This is also Phil Johnson's (http://teampyro.blogspot.com/) explanation in his helpful 5 part audio series on heresies. You certainly can find in the Racovian Catechism a stress on the use of "right reason". But you also find a complementary stress on revealed religion.

Socinianism is alleged to have been built on the foundation of the rationalists and skeptics. With reason playing king and Scripture being hoisted off the cognitive throne, every revealed doctrine was subject to critique and change. There is no doubt that the story of theology in the West over the last few hunded years tells this sorry tale. Reason has played the despot, assumed the crown, and cut the legs off its own throne in the process.

But that cannot be the total explanation for the Socinian revision of the gospel. I recently listened to Alan Gomes' ETS lecture on Socinianism. He argues that blaming incipient rationalism for full-blown Socinian heresy does not do justice to the writings of Socinus. Another explanation must be sought out.

Gomes argues that Socinus wasn't a rationalist at all but was firmly committed to the truths of special revelation (as a concept). He was not an inerrantist, holding to a view of Scripture not dissimilar to the modified infallibalism that many evangelicals hold today. For Socinus, Scripture did contain errors on matters of history and geography but not on doctrine. And, furthermore, those errors did not affect any of the Bible's teachings. This is an accurate summary of the opening sections of the Racovian Catechism. Indeed the inscription on Faustus' tomb speaks of him as finishing the work that Calvin and Luther began.

Now, admittedly, Gomes' explanation may seem hard to believe. After all if early Socinianism held to sola scriptura how is it possible that reading and exegeting the same Bible they arrived at diametrically opposed views on central doctrines to those of the Reformers?