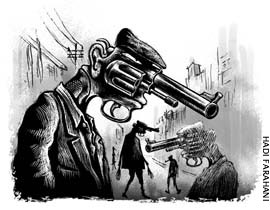 Spotting heresies and false teaching can be terribly addictive.
It can cover over, and that in a bad way, sins such as self-righteousness, arrogance, and pride. I think it is true to say that critics of polemicists sometimes have a valid point about how harsh and unattractive a portrayal of Christianity they see. It doesn't have to be that way. Polemics can be done with humilty and godliness.

This is a frank and honest comment from Ingrid Schlueter at Slice of Laodicea. It illustrates a point that I was trying to raise a little while back about the danger of blindspots.

"I have...removed several links to "discernment ministries" on my site. Recent incidents have pushed things to a point where it is evident that some "discernment" experts could use a little of their own. A good measure of your spirituality is not how many heretical doctrines you can spot in the shortest amount of time. A true measure of your spirituality is how you communicate with those of the household of faith on interpersonal matters that don't involve doctrine at all. If you prefer to fight, meddle and make pompous pronouncements more than you desire letting the Lord work in people's hearts and keeping out of personal issues that do not involve you, it's an indication that there's a problem. I have taken an unapologetic stand for truth on my blog and do not intend to change. But I want no part of what I see behind the scenes of some of these groups who specialize in pointing out the error of others while they can't even get along with their own fellow believers. We have nothing to say to the world at large if we as believers let petty disagreements turn into thermonuclear war."
Posted by Martin Downes at 2:27 PM