God's name and his self-revelation 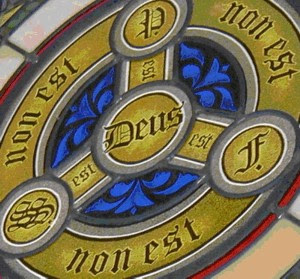 Here's another brief extract from last week's NWP lecture on the doctrine of God:

For most of us our names were not chosen because of the significance of their meaning. That doesn't mean that our names are not significant, they may well be because of their connection to family members (we may be named after our grandfather, or grandmother). It may be that our parents deliberately limited their list of baby names to those found in Scripture. Of course first names are often chosen to fit appropriately with surnames (although in Wales you can have names like William Williams, David Davies, and Evan Evans). Then again our name may well have been chosen for it's phonetic resonance.

Let me tell you an amusing story about that. When we took our pet guinea pig to the vet (a journey, incidentally, he did not return from) there was an embarrassing moment when the vet asked for guinea pig's name. Never let a two and a half year old have the authority to choose a pet's name, you may live to regret it. His name? "oh...Father Christmas" we said. Now the guinea pig didn't have a little white beard, or a sack full of toys, or a red outfit, or a little sleigh. There was no link at all between the name and the guinea pig. The connection was totally arbitrary.

We must also bear in mind the dramatic significance of God revealing his name to Moses in Exodus 3:14-15. That name, “I AM,” signifying that he is the self-existent One, has great ramifications for the redemption of the people from Egypt. It is also the name that Jesus applies to himself in John 8:58, and that Paul says that we call on when we confess that Jesus is LORD (see the use of Joel 2:32 in Rom. 10:9-13).

Bavinck summarizes so well the important connection in Scripture between God and his name:

There is an intimate link between God and his name. According to Scripture, this link too is not accidental or arbitrary but forged by God himself. We do not name God; he names himself. In the foreground here is the name as a revelation on the part of God, in an active and objective sense, as revealed name. In this case God's name is identical with the attributes or perfections that he exhibits in and to the world...Summed up in his name, therefore, is his honour, his fame, his excellencies, his entire revelation, his very being.

Posted by Martin Downes at 9:29 AM