Reformed orthodoxy and the art of propaganda 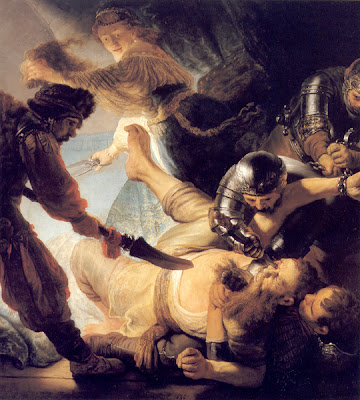 Dick Gaffin, in his essay in The Faith Once Delivered, warns of the "widespread but severely distorting model abroad today for reading the history of theology since the Reformation, especially its sweepingly negative assessment of seventeenth-century Protestant orthodoxy."

He follows this up with an illuminating footnote (which I have adapted). The model can be set out as follows:

The effects of the Fall:

[MD: you could also add twentieth century fundamentalism/conservative evangelicalism, in the eyes of some this is further evidence of the Fall]

primarily Karl Barth and the trends he initiated

On this view Reformed orthodoxy brings little other than the darkening clouds of medieval synthesis with its baleful dualisms, reappearing after the temporary respite brought by the bright sunshine of the Reformation. Characteristically, this theology is branded with the pejoratives "scholastic" and "scholasticism" (though it is remarkable how seldom an effort is made to define these labels; presumably they are self-evidently bad).

Under attack here, if we need reminding of what is obviously at stake, are the biblical integrity and continuing viability of major Reformed confessions such as the Canons of Dordt and the Westminster Standards, which stem from this "scholastic" mind-set.

The Faith Once Delivered, p. 7

Posted by Martin Downes at 9:55 AM

Email ThisBlogThis!Share to TwitterShare to FacebookShare to Pinterest
Labels: Quotes
Newer Post Older Post Home
Heresy is dishonouring to God and cruel to people. The theology, morality, and pastoral effects of heresy have been a long term research interest of mine. This blog is not as negative as you might think. You will find plenty of posts devoted to sound teaching and sound Christian living.