Implicit or Explicit? The Doctrine of the Trinity in the Old Testament 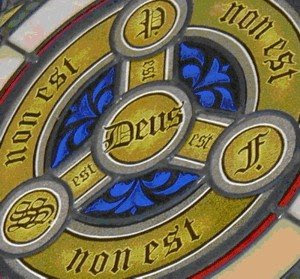 Yesterday I gave two lectures on the doctrine of God at the North West Partnership training course. Lecture two was on the Trinity, and toward the end of the lecture we tackled two questions:

The consensus among the group was to answer yes to both questions, but with a caveat. The qualifier in question concerned whether the Trinity was explicitly or only implicitly revealed in the Old Testament. An implicit revelation was favoured by most.

Roughly put this position contends that there is sufficient evidence in the Old Testament to warrant the conclusion that it is Trinitarian, but that this evidence is of insufficient clarity to warrant the conclusion that on the basis of the Old Testament alone it is possible to be Trinitarian. The trouble with implicit Trinitarianism is that it is not in fact Trinitarian. At best it affirms the unity of God with indications of a plurality within that unity. That is, of course, not the same as saying that this plurality ought to be conceived of as a tri-unity.

So that makes it a full thirty-nine books without a clear view of God as the Holy Trinity. Book forty, or the events that the books in the New Testament record and explain, finally bring us into an estate of clear Trinitarian theology and out of the estate of hints and suggestions as to the unity and plurality of the persons in the Godhead.

I disagreed with this conclusion, which caused an interesting reaction. It was as if I had said something deeply controversial.

Earlier in the lecture I offered the following minimal outline of the doctrine of the Trinity (you will find slight variations on this in some recent evangelical systematic theology textbooks):

1. There is only one God

2. There are three distinct persons in the Godhead: Father, Son and Spirit

3. Each person is fully God

Now, bearing in mind a few qualifiers, I think that the case can be made for supporting each of these points from the Old Testament alone. Point one of course being easy to establish (Deuteronomy 4:32-35; 6:4; Isaiah 44:8). Among my qualifiers are the following:

b. It has been said that "the doctrine of the Trinity is not so much heard as overheard in the statements of Scripture." Warfield could speak of a passage such as 1 Corinthians 12 alluding to rather than asserting the Trinity. All the data that was needed to establish the creedal doctrine of the Trinity (e.g. the Niceno-Constantinopolitan creed) was to be found in the pages of Scripture. But this data is not recorded in exactly the same verbal form as we find in the creeds and confessions (e.g. "being of one substance with the Father"). The creeds are a summary of a large body of data corresponding with points 1-3 in our minimalist Trinitarian framework. It is a rationalistic mindset, posing as a commitment to biblical authority, that faults the orthodox doctrine of the Trinity because it lacks, in one specific text, the wording of the creeds.

c. The doctrine of the Trinity is revealed in Scripture in action and not in the abstract. The saving God is the triune God, and he reveals himself as such as he saves his people. The Father elects and sends, the Son is sent, becomes incarnate, dies and rises thus redeeming his people, and Father and Son send the Spirit to regenerate, sanctify, indwell God's people, and to apply the work of the Son. This is directly related to point b.

d. We ought not to smuggle in unwarranted assumptions about what God could or could not reveal about himself during the Old Testament period. John Frame in The Doctrine of God (which I must say has been a very helpful resource for my teaching) cites Warfield's comment that "a full account of the Trinity would have confused the ancient Hebrews...in the great battle between monotheism and polytheistic idolatry" (this is a paraphrase of Warfield's position p. 703). As much as it goes against the grain to disagree with Warfield (tell it not in Gath!), how could he know that they would have been confused? Isn't that a little too psychological an approach to take? And if they lacked a "full account" would they not have been in even greater danger of slipping into polytheistic idolatry merely with hints and implications (Genesis 1:26 being but one example)? Is it not the case that a partial account would have been even more dangerous (a unity and unnumbered plurality in God)? Frame hints at this when he writes:

...from the data of the Old Testament alone, it would be difficult, if not impossible, to determine how many divine beings there are. One might well ask if Word, wisdom, name, glory, angel, Messiah, and Spirit designate seven distinct divine beings, and, if not, what the relationships among them are. (Frame, The Doctrine of God, p. 637-8)

Although I presume that he really means "how many" personal subsistences there are in the divine being as opposed to several distinct divine beings. However, David distinguishes between the Messiah as his Lord and the LORD (Psalm 110:1) and the Holy Spirit (Psalm 51:11). Are we safeguarded from thinking of there being more than three divine persons by the dominance of Christophanies in the Old Testament (the preincarnate mediatorial work of the Son of God) and the distinguishing, but not separating, of God and his Spirit? Is it not the case that in Genesis and Exodus we are clearly introduced to a person who is God, and yet is sent by God, one who can be seen, even as we are taught that no man can see God and live? Jesus has many names in the New Testament, and many names in the Old (the angel of the Lord, the Commander of the Lord's army, the Son of Man). Perhaps we are on safer ground when we see that the plurality of names finds its unity in the preincarnate appearances of the person of the God-man.

For now let me finish with three lines of enquiry:

i. The angel of the Lord in the Old Testament is clearly God, and yet is sent by God

And yet the angel of the Lord is also sent by God:

"But now go, lead the people to the place about which I have spoken to you; behold, my angel shall go before you." (Exodus 32:34)

"Behold, I send an angel before you to guard you on the way and to bring you to the place that I have prepared. Pay careful attention to him and obey his voice; do not rebel against him, for he will not pardon your transgression, for my name is in him." (Exodus 23:20-21)

How can we avoid the conclusion that the angel of the Lord is both God, and yet sent by God? And how is this any different to the theology of John's gospel where the Son is sent by God and yet is God?

ii. The promised Messiah in the Old Testament in clearly both human and divine

iii. Although fewer in number the Old Testament does not lack passages where two or more divine persons are referred to

Some examples would be:

"Draw near to me, hear this: from the beginning I have not spoken in secret, from the time it came to be I have been there." And now the Lord GOD has sent me, and his Spirit. (Isaiah 48:16)

"In all their affliction he was afflicted, and the angel of his presence saved them; in his love and in his pity he redeemed them; he lifted them up and carried them all the days of old. But they rebelled and grieved his Holy Spirit; therefore he turned to be their enemy, and himself fought against them." (Isaiah 63:9-10)

A distinction is made here, as it is elsewhere, between God and his Spirit (cf. Genesis 1:2), as well as affirming that the Holy Spirit is grieved by the sin of God's people (much the same as Ephesians 4:30).

In that last passage the Lord sends the Lord, which as Calvin says in his commentary is Christ being sent by the Father.

My contention is that these three lines of Old Testament enquiry are the kind of texts that support the minimal Trinitarian doctrinal framework set out in three points above.

Posted by Martin Downes at 1:12 PM

I also recommend this video:
The Human Jesus

Take a couple of hours to watch it; and prayerfully it will aid you to reconsider "The Trinity"

Yours In Messiah
Adam Pastor

As I was writing this post the thought crossed my mind that I was going to get a comment, and link, from an anti-trinitarian peddling their views.

What do you make of Richard Bauckham's approach where he seems to softening of the monotheism of the Jewish mind? Have you heard about it?

How weird is that video link 'Pastor Adam' posted? It even starts going on about some old English guy called Buzzard!

Do the 'In Messiah' crew have a formal church/name/group name?

I especially like your response to Frame's point about the number of Persons revealed in OT. Just as with the NT, the many names make sense in the Christophanies.

Thanks for the link Glen

Prior the Jesus Christ, the awareness of the Trinity was not necessary. However, the Old Testament contained just enough clues needed to latter solve the mystery of the Trinity (with scripture such as Genesis 1:26).

In the New Testament it was necessary to explain how the fullness of God was NOW made available to individuals through Jesus Christ and by the Holy Spirit.

Keep up the good work.