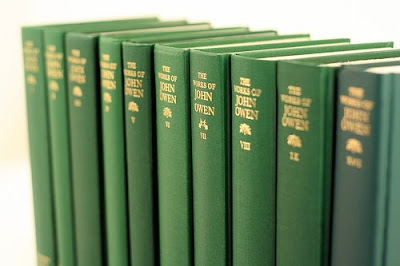 First published in 1890 this has only just been translated into English. These immense volmes tell the story of the powerful preaching of the gospel in Wales in the 18th and 19th centuries. In case you were wondering, "The Welsh Methodists held as one body to Calvinistic doctrines."

So far I'm not impressed by the wedge that he drives between the Reformers and the Reformed orthodox views of Scripture, or with his take on Old Princeton.

A Dissertation on Divine Justice and Vindicae Evangelicae, John Owen

By far the most relevant material on the 21st century debates about the atonement.

The Authority and Interpretation of the Bible, Rogers and McKim

Whither? A Theological Question for the Times, Charles Augustus Briggs

Sharpening my knives ready for some more writing on infallibility

Scripture and Truth, Carson and Woodbridge

Antibiotics for Rogers and McKim

The New Christians: Dispatches from the Emergent Frontier, Tony Jones

The Courage to be Protestant, David Wells

Plus, at a devotional and longer term preparation for preaching level, Luther and Calvin on Galatians
Posted by Martin Downes at 9:34 AM

I've had a small glimpse into the Calvinist Methodism of Wales from reading Iain Murray's 2 volume bio of Dr. D. Martyn Lloyd-Jones.

I'm glad to learn of this book that chronicles the Gospel ministry of that time. I'll be looking into those books.

Thanks for the recommendation.

Given that each volume is an 800 pager, I may not get through much else this summer.