The Legacy of B. B. Warfield 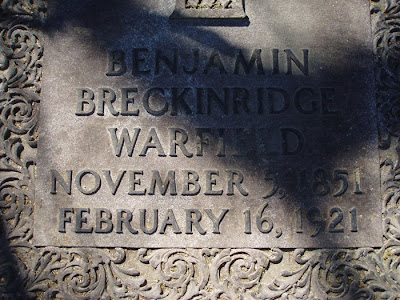 Kim Riddlebarger has started a new series on B. B. Warfield here.

If there was a top ten of the most maligned, most misunderstood, and least read, theological giants of the past, Warfield would probably come in at No. 1.

Which is a tragedy.

Here are the opening paragraphs:

During his thirty-four year reign as the ranking theologian at Princeton Theological Seminary, Benjamin Breckinridge Warfield (1851-1921) exerted tremendous influence upon much of American Presbyterianism. With his lucid pen and his passion to defend the Westminster Standards, there was little doubt about where Warfield stood on most every subject he addressed.

Even some eighty years after his death all one need to do is but mention his name in certain circles and you are sure to get a reaction, pro or con. A number of those who have interacted with Warfield view him as a kind of brilliant but nevertheless obscurantist fundamentalist (cf. James Barr, Beyond Fundamentalism, Westminster, 1984, 141) or a thorough-going rationalist , who supposedly invented the notion of biblical inerrancy (Alister McGrath, A Passion for Truth: The Intellectual Coherence of Evangelicalism, InterVarsity, 1996, 169). When viewed from this perspective, Warfield's most enduring legacy is to be seen in his important but misguided efforts in the heated controversy over the nature of biblical authority that dominated American Presbyterian circles in the latter part of the nineteenth century.

For a number of others, Warfield is viewed as an apologist and polemicist par excellence, who valiantly stood in the breach between the fading memory of Protestant orthodoxy and the rise of Protestant liberalism. But virtually all who have dealt with him agree that B. B. Warfield was a man with whose opinions one must reckon.
Posted by Martin Downes at 5:49 PM