The Evangelical/Emergent dance of death 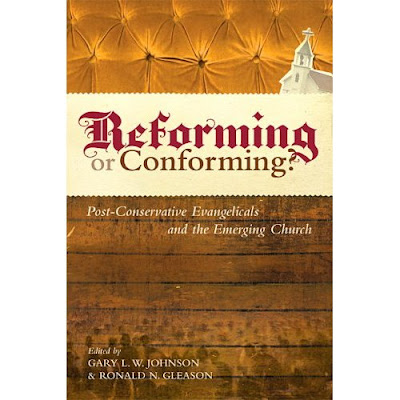 My copy of The Courage to be Protestant has finally arrived. I came across the following comments by David Wells that neatly summarize my thesis in the forthcoming Reforming or Conforming? Post-Conservative Evangelicals and the Emerging Church:

Evangelicals today are fearful, but they are fearful of all the wrong things. They are deeply apprehensive about becoming obsolete, of being left behind, so to speak, of being passed by, and of not being relevant. (p. 48)

This, of course, was the fear that haunted the older generation of Protestant liberals, so many of whom began their lives in evangelical homes. They were overwhelmed by the need to be relevant to the culture...Their conversation partner was the Enlightenment.

This lesson, however, is entirely lost on most evangelicals today. The reason is partly that they are treading a different path and so they do not see the parallels. Theirs is not the accommodation to high culture, as was the liberals'.

That culture was suffused with intellectual pride and humanism, with rationalism and hostility to Christian faith. It is now dying. The Enlightenment, from which much of it arose, has all but collapsed, as has the Christianity that had made itself into an ally.

The parallels between these older liberals and today's evangelicals are not in the culture to which they are accommodating but in the process of accommodation. Behind each is the same mind-set. The difference is only in what is being accommodated. And the dangers are all concealed beneath the apparent innocence of the experiment.

The fact is, however, that evangelical Christianity today is as endangered by its postmodern dance partner as the earlier liberals were by their Enlightenment partner. (p. 49)

Downesey, Would be interested to know whether the book is as hardline as the comment that you've posted. The thing that the post seemed to have missed when comparing liberals who responded to the enlightenment(and their eventual loss of the Gospel distinctive) with post-conservative evangelicals (not quite sure who he specically means)is that the context is totally different. Our context is not a western Christendom under the attack by the enlightenment philosophies, rather a western secular post-christendom that can't even agree what philosphies it is fighting for itself. I would be interested to know whether this book passes any comment on that.
Tar mate, Ste C