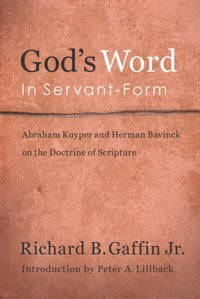 Some of the blog commenting subsequent to the WTS board’s release of documents is quite confident that the HFC Reply thoroughly refutes the HTFC Response to I&I and shows that there are no credible objections to the orthodoxy of Dr. Enns and I&I. Especially those animated with such confidence may want to consider the following - beyond the telling substantive critiques of I&I by those outside the seminary and in addition to the fact that the HTFC Response was never intended as a full critique to I&I it was an initial statement of some basic concerns produced and submitted under the deadline pressure of about a month (in contrast to the HFC Reply which eventually appeared about a year later).

First, the HFC Reply (approximately triple the length of the HTFC Response) spends considerable space arguing matters that are not at issue with the HTFC as if they were (for instance, I surely do not disagree where the Reply cites me with approval). More importantly, the précis of the HTFC Response (also included among the documents available on the seminary’s website) should not be overlooked, in expressing as it does the heart of the Response’s concerns.

Concerning the intended audience of I&I, the précis states (p. 5):

It should be apparent that it is just such troubled readers, in keeping with Proverbs 3:5-6, who are most in need of the clear affirmation indicated above [of the divine authorship and consequent divine authority of Scripture]. Such an affirmation assures us of at least three things in advance of whatever problems we encounter in the Bible. Because “God (who is truth itself) [is] the author thereof” (WCF, 1:4): 1) the Bible is reliable and, appropriate to the genre involved, will not mislead us in what it reports as having transpired; 2) the Bible does not contradict itself, and what it teaches as a whole, in all its parts, is unified and harmonious in a doctrinal or didactic sense; 3) problems that may remain insoluble for us are not ultimately unsolvable; they have their resolution with God.

This three-fold assurance is essential for dealing constructively with the problems there undoubtedly are for us in Scripture. It is especially essential to provide that assurance for those whose faith in Scripture is being shaken by these problems.

The HFC response to this passage, expressed to the board and faculty, was, in substance, that while the three points of assurance, which the HTFC précis considers requisite but finds lacking in I&I, may be suitable for demonstrating one’s own orthodoxy, they are not helpful for reassuring the many Christians who are wrestling with difficulties in the Bible.

That sort of reaction prompts the questions like the following:

1) What role, if any, beyond serving as a badge of theological orthodoxy, ought these three points to have in one’s study and interpretation of the Bible?

2) What role, if any, ought these points to have in teaching and writing, especially on matters of hermeneutics and biblical interpretation?

3)Why is it that even a minimal affirmation and explanation of these points with their implications for understanding the Bible and addressing the problems we find there are deemed out of place or even unhelpful for the intended audience of I&I?

A biblical-theological approach claiming to be developing in the tradition of Vos will have ready and clear affirmative answers to these questions. The HFC Reply, despite its considerable length, does not provide such answers.

A frequent claim of its supporters is I&I’s continuity with Westminster’s past. The following two items test that claim by comparison with the work of John Murray, as much as anyone a benchmark of that past.

Murray and I&I on Myth

The following passage is toward the close of the Preface in John Murray’s Principles of Conduct (p. 9):

It may be objected that the standpoint reflected in this book fails to take account of the mythological character of certain parts of Scripture on which a good deal of the material in these studies is based, particularly Genesis 1-3. It is true that the argument is not conducted in terms of the mythological interpretation of Scripture. By implication such an interpretation is rejected. That Genesis 2 and 3, for example, is story, but does not represent history, the present writer does not believe. An express attempt to refute such an interpretation had not been undertaken. But if I have been successful in demonstrating the organic unity and continuity of the ethic presented in the Bible, this fact should itself constitute one of the most potent arguments against the mythological interpretation of Genesis 2 and 3, as also of other passages. This is just saying that the historical character of the revelation deposited in the Bible does not comport with a nonhistorical view of that which supplies the foundation and starting point of that history. It is surely apparent how far-reaching must be the reconstruction of the Bible’s representation respecting the history of revelation if we are to reject the historicity of the fall of Adam as the first man. It is the conviction of the present writer that a mythological interpretation is not compatible with the total perspective which the biblical witness furnishes. To state the case positively, the concreteness of Genesis 2 and 3, as historically interpreted, is thoroughly consonant with the concreteness which characterizes the subsequent history of Old Testament revelation.

I&I takes up the issue of myth, primarily on pages 39-41, 49-56. In comparing these two assessments of myth in the Bible, I offer the following observations.

First, I do recognize that I&I is concerned for a “more generous” understanding of myth (40), one that is not synonymous, as has been its usual understanding in biblical studies, with “untrue,” “made-up,” “storybook” (40). No doubt Murray has this latter understanding in view in rejecting “the mythological interpretation.”

Murray’s speaking, simply and without differentiating, in the singular, of “the mythological interpretation” was responsible and defensible around 1960, when he wrote, as I believe it still is today. For the view of myth he rejects has been and continues to be common and widespread to the present within the historical-critical tradition of biblical interpretation. Emerging in late-Enlightenment scholarly study of the Bible, as a categorical rejection of its God-breathed and infallible truthfulness and historical reliability, this view also has its precursors, going back at least as far as the view flatly rejected in Scripture itself (e.g., 2 Pet 1:16).

Second, for these historical reasons, and for the sake of avoiding confusion and misunderstanding, it is incumbent on anyone wishing to maintain myth in the Bible in a more benign (“more generous”) sense to delineate that sense carefully from the conventional and widely accepted sense. As far as I can see, I&I fails to do that. Twice (40, 50), myth is defined as “an ancient, premodern, prescientific, way of addressing questions of ultimate origins and meaning in the form of stories: Who are we? Where do we come from?” But this definition simply begs important, even crucial questions. How does it differ from the understanding of the dominant historical-critical conception of myth in biblical studies? How is it any less applicable to the myths elsewhere in the ancient Mesopotamian world, whose similarities with the biblical materials I&I is so concerned to stress?

Specifically, what is factual, what is the historical reference in the storied myths of Genesis that differentiates them from myths of the nations surrounding Israel? The most I can find by way of an answer in I&I is that, in distinction from the gods of other contemporary myths, Israel’s God is Yahweh and that “Yahweh, the God of Israel, is worthy of worship” (55). But what is there in fact about who Yahweh is and what he has done that makes him worthy of worship? As far as I can see, according to I&I, the Genesis myths provide little, if any, help in answering that question.

Third, and this further compounds my difficulties, the major part of I&I’s discussion of myth unfolds under the heading, “Is Genesis Myth or History?” (49; cf. 39). Recognizing, as already noted, that I&I wants to maintain myth in Genesis other than in the sense of “untrue” or “made-up,” nonetheless a couple of things have to be said here. First, in terms of the question posed in this either/or heading, I&I comes down on the side of myth. That means, in some sense, it is not history and so makes it all the more incumbent - my concern expressed in the previous paragraph - that I&I do what it has not done: clearly distinguish its understanding of myth from the common, historical-critical one and also clarify in what sense Genesis, now to be taken mythically, is still historically reliable, that is, in what sense it is, in Dr. Enns’ terms, still “true” and “not made up.” Second, the heading question, “Is Genesis Myth or History?” has history in view in a modern, scientific sense. It apparently does not consider any other notion of trustworthy history.

Unless I’m missing something, it would have been far better, perhaps mandatory, and certainly wiser, to come down categorically, instead, on the side of history and then clarify how Genesis, in the face of its similarities with ANE creation myths, is nonetheless historical in a nonmodern, nonscientific sense. That at least is the approach that has been taken by the best in the Reformed tradition - e.g., Bavinck and Warfield, Murray and Stonehouse. Their view, all told, to cite just one, is that “the historiography of Holy Scripture has a character of its own,” which, among other considerations, means, “It does not speak the exact language of science and the academy but the language of observation and daily life.” It “uses the language of everyday experience, which is and remains always true…. the language of observation, which will always continue to exist alongside that of science and the academy” (Bavinck, Reformed Dogmatics, 1: 447, 445, 446; worth reading in this regard in their entirety are pp. 445, from the paragraph beginning at the bottom of the page, through 447, the last full paragraph).

Fourth, concerning its intended audience and purpose, I cannot see how I&I is helpful. Those struggling with faith issues about the Bible who may initially think they are helped by I&I will eventually be confronted by the question of historical reference in the Genesis material. Unless they close their eyes to the issues involved, they will be bound to ask in what sense, if any, it is reliable as narrative. Where that happens the treatment of I&I will prove to be confusing at best. I wish I did not have to draw such a conclusion, but I can’t see how it can be otherwise.

Finally, Murray’s observation may not be missed or evaded. “It is surely apparent how far-reaching must be the reconstruction of the Bible’s representation respecting the history of revelation if we are to reject the historicity of the fall of Adam as the first man.” Dr. Enns may very well wish to affirm the historicity of both Adam as the first man and his fall. But it is not clear on what grounds he does so. Clear affirmations of the historicity of Adam and his fall elsewhere in Scripture (e.g., Rom 5:12-19; 1 Cor 15:21-22, 45, 47) rest on Genesis 1-3. The integrity of the entire history of redemption, including its culmination in the death and resurrection of Christ, stands or falls with the historicity of its beginning, as presented in Genesis 2-3. I cannot see how the mythical approach to Genesis argued in I&I contributes to maintaining that integrity. If anything, it tends toward undermining it.
Posted by Martin Downes at 2:07 PM