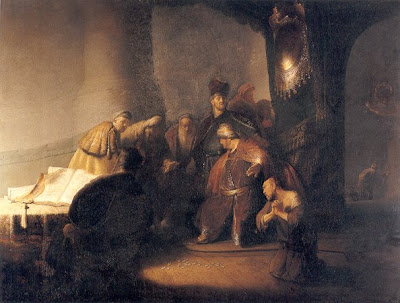 As a follow up to this post, here are some observations by Iain Murray on the impact of Liberal theology on the Free Church, and the poignant story of Ferdinand Christian Baur's unbelief:

The school of men who undid the commitment of the Free Church to the Bible did not stem the attack of naturalistic thinking on Christianity. Instead they accelerated it, and introduced the unbelief of the world into the Church.

They did so...while ever promising the opposite result. Yet this very assurance was being given when the results of higher criticism upon the German churches were already known and visible.

Horatius Bonar had drawn attention to the fact when he was Moderator of the Free Church in 1883. In speaking of the fruit in Europe, he instanced the life of one of the most influential of the German critics, Ferdinand Christian Baur (1792-1860):

In youth he was full of evangelical zeal. He came in contact with Strauss, and gradually the spiritual life went from him. Unbelief took the place of faith. He found he could not even pray; and when his wife was dying he had to send for an earnest pastor in the neighbourhood to pray with her, and supply his lack of service.

He found himself dumb in the presence of his dying wife. Unbelief could do nothing for him. It had closed his lips; and it had hidden the face of God.

Iain H. Murray, "The Tragedy of the Free Church" in A Scottish Christian Heritage, p. 384-5
Posted by Martin Downes at 8:09 PM

Email ThisBlogThis!Share to TwitterShare to FacebookShare to Pinterest
Labels: Liberalism