The Ending of Thomas Hardy 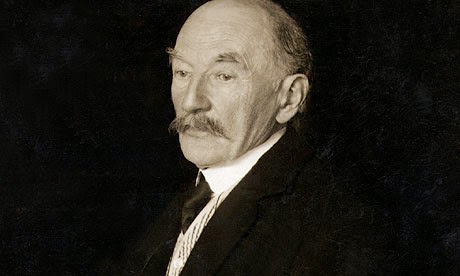 Here are some fascinating extracts from the closing chapters of Claire Tomalin's biography of Thomas Hardy:


On Boxing Day [1927] he asked for the Gospel account of the birth of Christ and the massacre of the innocents, and also the entries in the Encyclopedia Biblica, remarking when she [his wife Florence] had finished that there was not a grain of evidence that the Gospel was true.

On the final day of his life Tomalin notes the following incident:


Then he dictated to Florence two rough and rude epitaphs on disliked contemporaries.  One was George Moore, who had attacked him and was now accused of conceit.  The other, ungrammatical but clear in its intentions, went for G. K. Chesterton:

The literary contortionist
Who prove and never turn a hair
That Darwin's theories were a snare...
And if one with him could not see
He'd shout his choice word 'Blasphemy'.

It was his final word against Church doctrine and in favour of rational thinking, exemplified by Darwin -- a magnificent blast from the sickbed.

One of the final comments in the book breathes an air of sadness:


He knew the past like a man who has lived more than one span of life, and he understood how difficult it is to cast aside the beliefs of his forebears.  At the same time he faced his own extinction with no wish to be comforted and no hope of immortality.

The contrast between this ending and that of the seventy third psalm could not be more pronounced:


Nevertheless, I am continually with you;
you hold my right hand.
You guide me with your counsel,
and afterward you will receive me to glory.
Whom have I in heaven but you?
And there is nothing on earth that I desire besides you.
My flesh and my heart may fail,
but God is the strength of my heart and my portion forever.

Posted by Martin Downes at 7:06 PM

Oh my dearest friend, my savior, my Jesus, let not the ghost of Hardy harry me, nor let Tennyson tempt with his trifles, no Judas obscure me, no idols of kings stand in my way, for I am thine, as you have said, "It is so"