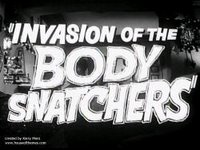 Heresy is the takeover of Christianity by an alien world-view


The words may stay the same but the concepts and ideas are alien. Persecution is like War of the Worlds, heresy is like the Invasion of the Body Snatchers. But both kinds of aliens are intent on destroying the church.

Here is Tertullian's take on it:

These are "the doctrines" of men and "of demons" produced for itching ears of the spirit of this world's wisdom: this the Lord called "foolishness," and "chose the foolish things of the world" to confound even philosophy itself. For (philosophy) it is which is the material of the world's wisdom, the rash interpreter of the nature and the dispensation of God. Indeed heresies are themselves instigated by philosophy. From this source came the AEons, and I known not what infinite forms, and the trinity of man in the system of Valentinus, who was of Plato's school. From the same source came Marcion's better god, with all his tranquillity; he came of the Stoics. Then, again, the opinion that the soul dies is held by the Epicureans; while the denial of the restoration of the body is taken from the aggregate school of all the philosophers; also, when matter is made equal to God, then you have the teaching of Zeno; and when any doctrine is alleged touching a god of fire, then Heraclitus comes in. The same subject-matter is discussed over and over again by the heretics and the philosophers; the same arguments are involved.

What indeed has Athens to do with Jerusalem? What concord is there between the Academy and the Church? what between heretics and Christians?

Our instruction comes from "the porch of Solomon," who had himself taught that "the Lord should be sought in simplicity of heart." Away with all attempts to produce a mottled Christianity of Stoic, Platonic, and dialectic composition! We want no curious disputation after possessing Christ Jesus, no inquisition after enjoying the gospel! With our faith, we desire no further belief.

Posted by Martin Downes at 6:07 PM

Trying to know God through a book isn't heretical......

What exactly is a heresy???

Christianity was taken over by "aliens" the moment it became the official church of imperial Rome and thus became an integral part of the western imperialist mis-adventure.
A "holy" empire being the ultimate oxmoron.
We also live in a day and age when ALL the Sacred Scriptures of the entire Great Tradition of Humankind are freely available on the internet or via Amazon.

And in a day and age when the monstrous semitic monotheisms are threatening WW3 to assert the dominance of their one "true" archaic belief system.

I wasn't sure if your comment was a statement or a question without a question mark.

That Christianity should ever have become the official imperial religion is an astonishing piece of history. Wasn't Christianity under the hob nailed sandal of Rome for centuries?

Tertullian's point is that pagan philosophy was dressing up in Christianity but wasn't the real thing. That's why it was the invasion of the body snatchers.