Is there a 'Problem of Forgiveness'? Dissonant voices 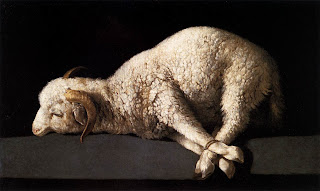 Four voices.  Only one of them resembles the tone and accent of the Master.


As we saw elsewhere Paul likewise instructs us to be imitators of God: just as he forgave our sins through Christ, we should forgive each other, but if God so forgave our sins through Christ, that he yet demanded the punishment of them from Christ itself, what prevents us from seeking satisfaction for ourselves for the offenses of our neighbours?


The traditional understanding says that God asks of us something that God is incapable of Himself. God asks us to forgive people. But God is incapable of forgiving. God can’t forgive unless He punishes somebody in place of the person He was going to forgive. God doesn’t say things to you—Forgive your wife, and then go kick the dog to vent your anger. God asks you to actually forgive. And there’s a certain sense that, a common understanding of the atonement presents a God who is incapable of forgiving. Unless He kicks somebody else.


Is it not strange for Jesus (God incarnate) on the one hand to say ‘do not return evil for evil’ while still looking for retribution himself? Similarly wouldn’t it be inconsistent for God to warn us not to be angry with each other and yet burn with wrath himself, or tell us to ‘love our enemies’ when he obviously couldn’t quite bring himself to do the same without demanding massive appeasement? If these things are true, what does it mean to ‘be perfect…as your heavenly Father is perfect’ (Matt 5:48)? If it is true that Jesus is ‘the Word of God’ then how can his message be inconsistent with his nature? If the cross has anything to do with penal substitution then Jesus teaching becomes a divine case of ‘do as I say, not as I do’. I, for one, believe that God practices what he preaches!


'Why should our forgiveness depend on Christ's death?'...'Why does God not simply forgive us, without the necessity of the cross?'...'After all', the objector may continue, 'if we sin against another, we are required to forgive one another.  We are even warned of dire consequences if we refuse.  Why can't God practise what he preaches and be equally generous?  Nobody's death is necessary before we forgive each other.  Why then does God make such a fuss about forgiving us and even declare it impossible without his Son's "sacrifice for sin"?'

For us to argue, 'We forgive each other unconditionally, let God do the same to us', betrays not sophistication but shallowness, since it overlooks the elementary fact that we are not God.  We are private individuals, and other people's misdemeanours are personal injuries.  God is not a private individual, however, nor is sin just a personal injury.  On the contrary, God himself is the maker of the laws we break, and sin is rebellion against him.

The reason why many people give the wrong answers to questions about the cross, and even ask the wrong questions, is that they have carefully considered neither the seriousness of sin nor the majesty of God.

Posted by Martin Downes at 7:23 PM

Email ThisBlogThis!Share to TwitterShare to FacebookShare to Pinterest
Labels: Enemies of the Cross, The work of Christ

Good stuff. The objection that God asks us to do something (forgive) when he is not prepared to without appeasement is simply ignorant. The Christian never forgives without Christ - without his life in him, and the knowledge that his death has atoned for ALL the sins of his people. Thus Christ's sacrifice is ever present in the minds of those who forgive. Thus atonement has been made, and a price paid for the forgiven sin.

The more I hear and read B McLaren (and Chalke for that matter) the more I see of a tragic misreading and misunderstanding of substitutionary atonemnet and the propitiaion of God's wrath through the work of Christ. My first though after reading this quote is that he hates God or is angry with his own dad (or both)and has confused God's purposes with his own outrage that he would never sacrifice his child. I cannot understand how anyone with even a basic grasp of these Holy Scriptures would place Jesus as a victim or that He was some poor schlameel that stumbled in to Jarusalem and got himself crucified. He is God as The Father is God (and The Spirit)and all of these things were know of God before the foundation of the earth. Amen.

Forgiveness, it may be really hard for us. But we must always think of God, God have given us a lot of chances even we're all sinners.