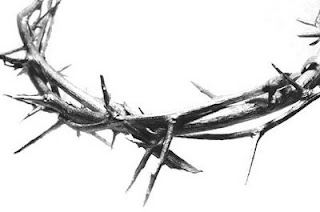 On the sixth day, before the day of rest, Pilate declared "Behold the man!" (John 19:5)

He spoke better than he knew.

For on that sixth day the last Adam, not the first, crowned with thorns, was about to lift the curse upon creation (Rev. 22:1-3) by himself becoming the substitute, the sin bearer, the one on whom would fall the covenant curses.

He spoke better than he knew.

Only later, as Christ appears before his enemies at the Stone Pavement, would Pilate declare "Behold your King!" (19:14). When he first appeared arrayed in purple, beaten and wearing the crown of thorns, that grotesque parody of his kingship, Pilate proclaimed him as "the man."

This should not surprise us, in John's gospel people often speak better than they know. Witness Nathaniel in 1:49, Caiaphas in 11:45-53, and Mary who supposes that Jesus is "the gardener" in 20:15.

The prophet Zechariah (6:12-13), as he crowned the head of Joshua the high priest, an act laden with prophetic symbolism concerning the Messiah to come, also declared:

In John's gospel Jesus is the God-man, the temple, the location of worship, the high priest, the sacrifice, the king whose cross of shame is his glory, who is "lifted up" upon the tree, whose exaltation on the cross opens the way for the nations to stream to himself as the temple of the Lord just as Isaiah had foretold (John 12:32-33, cf. 12:20-21, Isa. 2:1-5).
Posted by Martin Downes at 1:20 PM

Thank you for this rich Gospel meditation!