The Holy Spirit, the Father and the Hypostatic Union 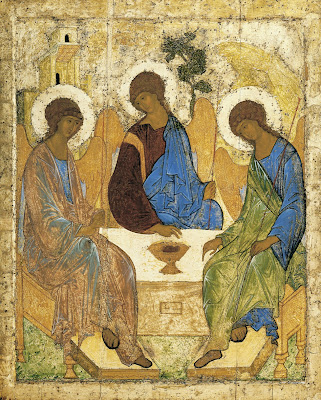 One of the refreshing things about reading long dead writers is that, bizarrely, they can help you to look at familiar things with fresh eyes.

Take the following observation by Augustine on the Trinity.  In context he is launching out on his discussion of whether 'sending' (the missions of the Son and Spirit) implies inferiority.

He has this telling remark about the status of the Spirit:


The Holy Spirit too, therefore, is said to have been sent because of these bodily forms [a dove, fire] which sprang into being in time in order to signify him and show him in a manner suited to human senses.

But he is not said to be less than the Father as the Son is on account of his servant form.  That form was attached in inseparable union to his person, whereas these other physical manifestations appeared for a time in order to show what had to be shown and then afterward ceased to be.

The Son's 'sending' is tied to the union of his Godhead to his perfect humanity, and therefore to his estate of humiliation.  But the nature of the outward manifestation of the Spirit's presence did not involve his union with created things, 'he did not join them to himself and his person to be held in an everlasting union' (De Trin. Book II:2:6).

For Augustine there it is clear that we will not understand how Scripture presents the Son of God unless we realise the distinctiveness of the Son's redemptive mission and his relationship to the Father.  Thus the Son is spoken of:

Beautifully outlined and elaborated in Book 1:4.

Even so Augustine adds a third interpretative rule to include texts that speak of the Son:

What happens when we fail to follow this rule?

Augustine divides interpreters into those who are culpable in treating the Son as less than the Father ontologically (think Aians), and those who 'are no so learned or so well versed in these matters, and try to measure these texts by the form-of-a-servant rule' and find that 'it is very upsetting when they fail to make proper sense of them'.  He goes on:


To avoid this, we should apply this other rule, which tells us not that the Son is less than the Father, but that he is from the Father.  This does not imply any dearth of equality, but only his birth in eternity. (De Trin. Book 2:1:3)

Ah, so you end up having to confess the eternal generation of the Son to make sense of certain texts (e.g. John 5:26).  How very Niceno-Constantinopolitan of him.  Or as Father Ted would say, 'that would be an ecumenical matter'.

Posted by Martin Downes at 2:02 PM