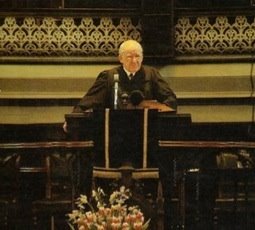 Geoff Thomas has written a foreword for a new hardback edition of Dr. Martyn Lloyd-Jones' classic book Spiritual Depression: It's Causes and Cure.  Here's the start of the foreword:


There was no one in the twentieth century more suited to preach, counsel and write on this subject of spiritual depression than Dr. D. Martyn Lloyd-Jones. This subject has always been addressed by pastors, but particularly so from the time of the Reformation when the wrappings of human traditions were removed from biblical Christianity.

The Puritan period especially excelled as an age when sermons were life and power, and many kinds of men and women were drawn to faith in the Lord Christ. They brought their past with them into the kingdom of God and were troubled with doubts and periods of darkness. Their pastors became physicians of the soul and learned to deal with various conditions of spiritual desertion and depression and their books on this subject are read today. Dr Lloyd-Jones was a living representative of that tradition. He was exceptionally gifted in dealing with this subject, and Spiritual Depression has done much pastoral good in the last fifty years.

We ministers give it to particular people whom we believe would profit from it. Perhaps we point out to them one of the sermons in the book which we feel could help them. I am especially fond of the message entitled 'That One Sin' and a striking incident recounted there by the Doctor from the days of his ministry in Wales. It has often done homiletical duty for me. Why was Dr. Lloyd-Jones so well-equipped to write on a subject like this?

i] He was such a well-rounded, intelligent, and tender personality.

Although a mighty intellect with a formidable presence, he was accessible and not at all intimidating. There was not a trace of snobbery in him whatsoever; he loathed that sin. He had a particularly blessed marriage. Mrs. Bethan Lloyd-Jones, herself a qualified doctor, came from one of the foremost Calvinistic Methodist families in Wales rooted in the ethos of the local countryside of south Cardiganshire, an evangelical home where warm affection, godly living, the importance of education and reverence for God were prized and natural graces. Her father was an ophthalmic surgeon and her grandfather was one of the leading preachers in Wales who ministered in one congregation in Newcastle Emlyn for half a century, preaching there throughout both the 1859 and 1904 revivals. Mrs. Lloyd-Jones was also a descendant of the Baptist preacher Christmas Evans.

Out of the harmony and affection of that home with the two daughters they were given came the pastoral ministry and counselling that strengthened multitudes. I remember telling the Doctor on one occasion that my parents were moving from South Wales to live just around the corner from us in Aberystwyth, and his face lit up with delight at that news. His family was vitally important to him. Dr. Lloyd-Jones once spoke to a group of doctors about the essentials needed to counsel men and women. He said this:


[The counsellor] is not doing something outside himself. He is giving something of himself and his experience, and there is an exchange taking place between the patient and himself. Hence the most important thing of all in counselling is the character and personality of the counsellor. What is the greatest essential in a counsellor? I would say that it is a quiet mind, and that he is at rest in himself. You will remember how our Lord put this on one occasion — ‘Can the blind lead the blind? If the blind lead the blind they will both fall in the ditch.’

In other words, if a man is in trouble within himself, and is restless, he is really in need of counselling himself. How can he give useful counsel to another? The first requisite, therefore, in a counsellor is that he himself is possessed of a quiet mind, a mind that is restful. It is at that point, of course, that the importance of the Christian faith comes in.

I am prepared to defend the proposition that no man ultimately can have a quiet mind, a heart at rest, and at leisure from itself unless he is a Christian. He needs to know a true peace within — the peace of God which is able to keep both mind and heart. The patient comes in to see him in an agitated troubled condition, and can detect if there are similar manifestations in the counsellor.

The eight points in the foreword are:

1.  He was such a well-rounded, intelligent and tender personality
2.  He was utterly committed to the faith of the Scriptures
3.  He was a man who maintained the disciplines of private devotion
4.  He was a man to whom people went for spiritual help
5.  He was a man confident that to grasp the person and work of Christ, the ministry of the Holy Spirit and the ethical demands of the Bible is itself a mighty power to transform people, to elevate, ennoble and enrich their lives
6.  He was a man who was prepared to help people in every way that he could
7.  He was a man with a lucidity in explaining the human condition
8.  He was a man persuaded that the person who had come to seek his counsels had more knowledge of all the circumstances involved than he himself had

(HT: Heavenly Worldliness)
Posted by Martin Downes at 10:00 AM

I do hope the Banner haven't printed the grocer's apostrophe in the title, as in your blog post.

That aside, you have encouraged me to read the book at last. I bought a copy in the 1970s but never read it as friends warned me that it could make me even more, well, depressed.

We all face difficult time in our lives. At that time we need somebody who helps us emotionally to come out of that situation. Even sometimes we have to goto professional for their couselling. Thanks for such a nice blog.

The article has really peaks my interest. I am going to bookmark your web site and hold checking for brand new information.

We all encounter this depression.
You just need to give yourself sometime to think of and relax. Thanks for a great article.