A New Kind of Christianity 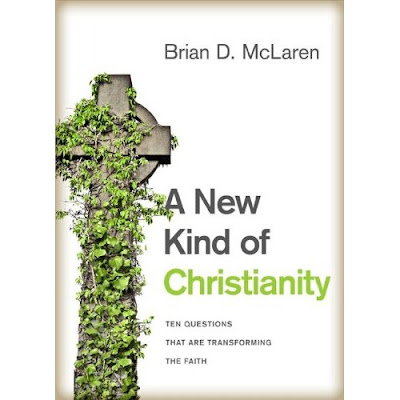 I've read several of McLaren's earlier books in my time but was not aware of this one. It strikes me that it belongs in the "Why Christianity Must Change or Die" section of the bookstore, and we wait to see what beautiful orthodox items we must jettison in the process. An after reading the commendations for the book from Steve Chalke, Phyllis Tickle and Pete Rollins I'm half wondering if it will make a greater impact than the Bible.

Here are Wittmer's reflections on the introductory chapters:

I read the introductory three chapters of A New Kind of Christianity, and so far it’s an updated version of the Brian we’ve seen before. He claims to be “a mild-mannered guy” who is only looking for a new way to be a Christian that will boost the declining numbers in our churches, and he can’t understand why his critics respond with “fear,” “clenched teeth,” and “suspicion and accusation.” Brian’s really good at winning sympathy, and soon I was loathing myself for ever politely disagreeing with such a nice man.

But then I remembered that this debate about the Christian faith—which he and his friends started—is not a personality contest. You can’t dismiss what Christians have always believed and then expect a free pass because you’re likeable. And just below the surface of Brian’s humble, can’t-we-all-just-get-along vibe is an accusatory tone that repeatedly compares his critics to a religious Gestapo whose leaders defend their conservative beliefs because they don’t want to lose their jobs.

That doesn’t sound like me. I am an easy-going guy who just wants to love Jesus. But to love Jesus, I have to know and believe something about him. Jesus is not an elastic symbol for whatever we happen to value (e.g., inclusive love), but is an actual person who can be known, trusted, and loved.

So why doesn’t Brian want me to know and believe the truth about Jesus? He says that his new kind of Christianity is led by Doug Pagitt, who isn’t sure that Jesus is God; Marcus Borg, who argues that Jesus is dead; and Harvey Cox, a Harvard Divinity professor who wants to blow the whole thing up and construct a new view of God that will connect with our secular age.

The rest of the post can be found here

The next post is on McLaren's first question, "What is the overarching storyline of the Bible?" On which Wittmer comments:

Brian’s real beef with Creation-Fall-Redemption is not the C or the R but the F. He does not believe that there was a Fall (or original sin or total depravity or hell) but that what we have traditionally called the Fall is actually “a coming-of age story” which—wait for it—describes “the first stage of ascent as human beings progress from the life of hunter-gatherers to the life of agriculturalists and beyond.” I have quoted him verbatim so you know I am not making this up. I asked my Old Testament colleague where Brian may be getting this from, and he said that this sounds like modern Judaism (which doesn’t believe in a Fall or original sin), except that even it wouldn’t say that Genesis 3 represents a step up.

Brian says a lot of other things in Part 1, but as you can see, he is no longer having a Christian conversation. He prefers the Hebrew God Elohim over the Greco-Roman God Theos, for the former prefers the messiness of story and evolution while the latter is a “perfect—Platonic god” who “loves spirit, state, and being” and is “perfectly furious” with his fallen creation and just wants to smash it all to hell. Theos may be popular with the “fire-breathing preacher” (does anyone know anyone like this?), but he “is an idol, a damnable idol.” Brian writes that he would rather be an atheist than believe in the God that most of us think is found in the Bible.

1. Brian seems to be offering a modern Jewish rather than Christian perspective on the opening chapters of Genesis. His flat-out denial of a Fall, original sin, and total depravity and his dismissal of Theos raises questions about his view of Paul, who clearly teaches the former in Romans 5, and the New Testament, which refers to God with the Greek term Theos.

3. The fourth question which Brian will address in this book is “Who is Jesus and why is he important?” Given that Brian doesn’t believe in a Fall, original sin, or hell, that is a very good question. I can’t wait to hear why God would come and die for a world that didn’t need his help.

4. Brian seems incapable of writing a book without taking repeated cheap shots at seminary education. He often reminds us that he missed out on seminary and is better for it, that he would not see what he sees in Scripture if he had gone to seminary. On that we agree.

Posted by Martin Downes at 9:24 AM

I don't think one can pin this on the "evolution" issue. Many Christians who believe in evolution do not go so far off track from theological orthodoxy as (apparently) McLaren does.

This goes way beyond the evolution issue.

I think its a great book - and its a way to get rid of the "other gospel" that Paul talked against, but that the church has been preaching/practicing for so many years.

Can you please tell us what "other gospel" the church has been preaching that Paul was so against?

I question whether Christians have "always believed" what Brian McLaren respectfully challenges in this book. When did we stop paying attention to Jesus' words? The dominant voice in modern Christianity, at least in the US, is Paul. Jesus' teachings are almost nowhere to be found. McLaren's recognition of the fact that we don't pay attention to Jesus' mission statement but instead focus on Paul's was the "emperor's no clothes" moment in this book which resonated so much for me.