You do the math (updated) 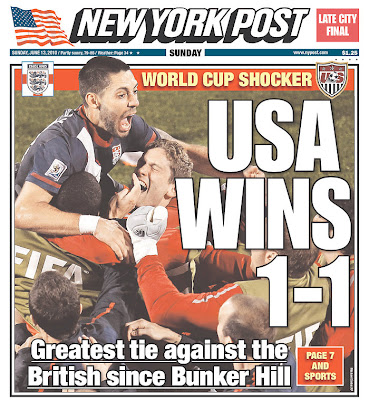 Thanks to Sheena Strain for drawing my attention to this headline.

And thanks to Justin Taylor for pointing out to me that it was probably inspired by this: For more on the connection between the headlines go here

Still, let's not let forget the fact that to England it felt like a defeat, and the New York Post confuses the "British" with the "English."

Yep, definitely adds up to a win on this side of the pond. :0)

As an Englishman married to an American I call tell you that in our house I was the one who considered it a loss. Joy was delighted with the result, 1-1 was a win for the US and a loss for England. As Kermit said, "it ain't easy being Green".
Shalom
Stephen