This is not yet your grandfather's Calvinism 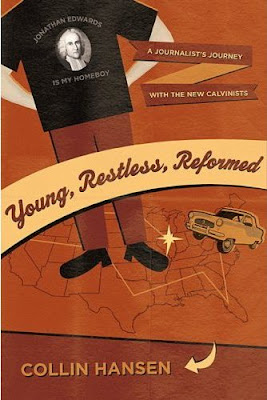 After reading several reviews I finally decided to read through Collin Hansen's Young, Restless, Reformed: A Journalist's Journey with the New Calvinists.

The book is obviously intended to be impressionistic about the younger generation of Calvinists within evangelicalism in the United States. As well as interviews with several prominent speakers and authors (John Piper, Al Mohler, Lig Duncan, Mark Driscoll, Joshua Harris, C. J. Mahaney etc.) there are plenty of reflections with young people connected with the ministries of those men (either attending, studying at, or working for Mars Hill, Bethlehem Baptist, RUF, Southern Baptist Theological Seminary, etc.).

In many ways the book fulfills what George Marsden once said about history being the story of personalities, wider movements, and institutions. The mediating structures in this case between the key personalities and the wider movement are largely conferences, books, and the multi-media distribution of the teaching ministry of the larger churches. Perhaps the last of those three is the most influential.

The book is something of an apologetic for the positive transforming impact of a reformed understanding of salvation. Story after story is given of the humbling, God exalting, missions motivating, church planting, power of God's sovereign grace in the gospel.

Calvinism transforms lives. It is the solid rock on which the suffering saints stand, and it is when these notes are struck again and again that passionate songs of praise pour out from grateful hearts.

Another standout feature is the legacy of great men long dead whose writings continue to feed the souls of the leaders and followers of this movement, most notably Jonathan Edwards and Charles Spurgeon.

The book also picks up on what should seem obvious, that what is nick named Calvinism is none other than Biblical religion. Not just God exalting theology, the kind that passes the litmus test described thus by Martyn Lloyd-Jones,

"In every view of salvation the place given in it to the glory of God provides the ultimate test. The proof that it is truly scriptural is that it gives all the glory to God."

but also one that simultaneously humbles the human heart in its presence, bends the knees, subverts pride, and makes God's bitterest enemies his closest friends. This is not just orthodoxy, it is orthodoxy that transforms lives.

The encounter with Calvinism often begins not with Calvin, or Edwards, or Spurgeon but with Moses in Exodus, with Jesus in the gospels, or with Paul's letters. Testimonies are provided throughout the book of young people who encountered Calvinism in the preaching, or the reading, of the Word of God. And they met it when they saw that the things of first importance, and how they impact a life in conversion, are shaped by Reformed adjectives. Depravity is total, grace is irresistible, election is unconditional.

Is there more to Calvinism than this? Of course there is. However, for many who are new to Reformed theology, it is met not in its grand historic vision or presentation (as found in the great churchly statements of the Heidelberg Catechism or the Westminster Confession) but in relation to the power of God in salvation. This of course is also the common bond between Calvinists who hold to historic Reformed views across the board and those who embrace a Calvinistic view of salvation only.

I think this observation on an emphasis that runs throughout the book explains why this isn't yet your grandfather's Calvinism. There is more to the Reformation heritage, much more, and this needs to find its way into the rest of the story after p. 156. And I'm sure that there is more going on because once you follow the Calvinist trail of literature and history it leads to the rich pastures of the confessions and catechisms, and of covenant theology.

One criticism of the book is the failure to signal just how much today's resurgence relies on and remains connected to the continuing work of grace that has kept God's people believing in his sovereignty. The representation of Calvinists outside of the current resurgence relied more heavily on negative stereotyping and caricature than was healthy. Even though there is some attempt to signal connections to the past there isn't a sufficient indication of how the last few generations have held to and been transformed by the same truths.

Then again the book is impressionistic and focussed narrowly and deliberately on certain influential figures and centres. As a result the book tends towards reports of Baptists (with illuminating stories about the struggles over Calvinism in the SBC) more than Presbyterians. Although RUF and Ligon Duncan do feature it would have been helpful to take a close up look, for example, at First Presbyterian Jackson or Tenth Presbyterian in Philadelphia just as Mars Hill or Covenant Life Church were covered.
Posted by Martin Downes at 11:34 PM

Thanks for the review.

I enjoyed reading this on holiday too, though was left wanting to read something much more substantial; still I saw, like you, what it was trying to achieve. Also made very welcome at ChristChurch Deeside..!

Sorry not to have met you when you came to visit. We were in South Wales. Were you there the same Sunday as Iain Murray and Stuart Olyott? No pressure on the preacher there then!