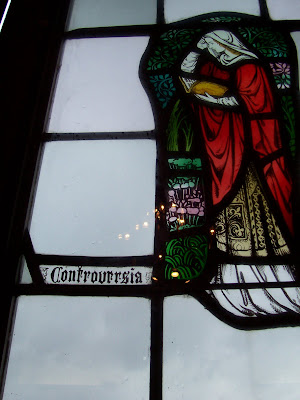 Debates about the atonement are never far removed from theology proper. Penal substitution is not only exegetically founded but is also doctrinally intelligible within a particular set of beliefs. These beliefs include the attributes of the justice and holiness of God, their relationship to the divine nature and will, and the existence and of sins committed by rational creatures.

And, perhaps it is unnecessary to say this, but the God who has revealed truths to us about his justice, holiness, nature, and will, has also revealed truth about the nature and extent of our depravity (which we see and feel the effects of every day but need revelation from God to rightly comprehend) and the remedy for that sin in the cross of Christ.

Back in the 1650s many of these issues were undergoing discussion and debate in England. The chief detractors of penal substitution were the Socinians (who incidentally were also open theists and anti-trinitarians). John Owen made a telling contribution to this debate with his A Dissertation on Divine Justice (1652). He understood full well that objections to "penal satisfaction" were connected to particular views of God's justice and will in relation to sin and its punishment. Owen considered that the Socinians placed all their hopes of "overturning the doctrine of the satisfaction of Christ in opposing this justice."

The issue at hand in this debate was summed up in the following question (read it out loud if the first reading of it is heavy going):

Whether it be natural to God, or an essential attribute of the divine nature, --that is to say, such that, the existence of sin being admitted, God must necessarily exercise it, because it supposes in him a constant and immutable will to punish sin, so that while he acts consistently with his nature he cannot do otherwise than punish and avenge it,--or whether it be a free act of the divine will, which he may exercise at pleasure?

Owen said that his opponents denied:

That there is any such attribute in God as requires satisfaction for sins, which he is willing to forgive, but maintain that he is entirely free to "yield up his claim of right," as they phrase it, at pleasure; that divine justice ought, by no means, to be reckoned among the causes of Christ's death.

This issue hasn't gone away. For example consider the following from a contemporary Christian author:

“The traditional understanding says that God asks of us something that God is incapable of Himself. God asks us to forgive people. But God is incapable of forgiving. God can’t forgive unless He punishes somebody in place of the person He was going to forgive. God doesn’t say things to you—Forgive your wife, and then go kick the dog to vent your anger. God asks you to actually forgive. And there’s a certain sense that, a common understanding of the atonement presents a God who is incapable of forgiving. Unless He kicks somebody else.”


Now aside of the fact that the quotation above obliterates the Creator/creature distinction by confusing what is appropriate for God as God to do with what he requires of his creatures (an argument that will not pass Paul's reasoning about these matters in Romans 12:14-13:4) what view of God's nature is being presented here? Must God punish sin or does he merely choose to do so?

If there is no necessity on God's part to punish sin, since he is free to forgive sins by an act of the will, why was Jesus Christ his beloved Son crucified at all? Why didn't God merely forgive sins by his word on the basis of the response of faith and repentance? If you grant that he could have done that, what view of the cross would you then hold to?

Owen drew out the implications of these two positions:

Between their sentiments and ours on this point there is the widest difference; for we affirm the justice by which God punishes sin to be the very essential rectitude of deity itself, exercised in the punishment of sins, according to the rule of wisdom, and which is in itself no more free than the divine essence.

In the end the view we take of atonement cannot be divorced from our doctrine of the divine nature and attributes.

Posted by Martin Downes at 1:07 PM

Martin - I nearly always miss your posts, because I tend to read my blogs in the RSS reader of my phone. Because your feed just has the headline and not the whole post, I can't read the post till I get home and fire up my browser - and by then the moment is lost. Any chance you could turn on full feeds? Thanks.